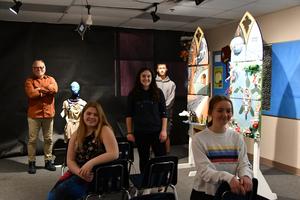 Imagine discovering at the age of 15 that only 12 years remain before the impact of climate change becomes detrimental. Now imagine trying to articulate this new reality about your world into a meaningful piece of art that conveys your feelings, your concerns.

That pretty much summarizes the task given to 56 Grade 10 students in a blended-learning environment that combines English with Social Studies at Highland Secondary School.

Students took part in a collaborative inquiry-based project on the topic of climate change, pollution and waste. Their research was then transposed into art to create a 32-piece collection mounted on panels that form a grander art installation called Terra Sanctorum.

The installation took its inspiration from Medieval Gothic stained-glass windows according to Artist-in-Residence Gary Aylward. As Aylward explained, for centuries stories have been told in the visual form. His idea was to arrange each panel or “window” as an iconic Canadian Prairie Church.

“Religion was never the focus of the issues,” stressed Aylward. “The Church serves as a piece of architecture that lends itself to storytelling.”

Terra Sanctorum was unveiled January 23rd inside a classroom at Highland Secondary school to a select audience of students, faculty, parents, and a handful of the public (if they so happened to be informed). The display was never meant to be widely broadcasted but for those who caught a glimpse, the message was understood immediately.

Nicole Minions, Councillor for Town of Comox, who is pushing for a complete ban on single-use plastics, was notified by district staff to drop by the school to see the display because of the connection of her advocacy work with the concerns that youth are grappling with in her community today.

“Hearing our local youth say how much they learned was touching and inspiring.  The topics of fast-fashion, deforestation, and plastics in the ocean, for example, were over-arching concerns I saw,” expressed Minions.  “To hear future generations use words such as fear and disappointment in the world we are creating is eye-opening.”

“It’s a great way to get other people more aware because it is a very relevant issue,” explained Kalea Richardson. “There is a lot of information I had no idea about.”

Richardson and classmate Liv Deluca created their story into a creation they titled  Tarotable Future. Like Tarot cards, their research revealed what seems like an apocalyptic revelation, and for these young, insightful Grade 10 students, the message can be more than a prophecy. It’s a plea to act now before it is too late, according to Richardson.

“There is very limited time left to stop the warming of the Earth before it becomes detrimental,” described Richardson and DeLuca of their project in a pamphlet that accompanies the art installation.

Abby Duncan calls the climate change crisis abysmal. Abysmal is what she named her piece that portrays the tragic effects of deforestation, a large majority of which is conducted illegally, she learned.

“Swaths the size of England are lost each year which is the [equivalent] to 27 soccer fields per minute”, described Duncan in her write-up. “[Deforestation is] resulting in an alarming amount of 15 percent of greenhouse gases in the atmosphere, which is a contributor to global warming.”

Matthew Munroe said it was hard to get started but his group eventually landed on plastic pollution as a topic. Munroe made a connection with the work of his grandfather, a commercial fisherman,  who is aware of the issue of plastics in the ocean. In his research, Munroe and his classmates learned about a whale washed up dead on the shores of Thailand with an abundance of plastic in its stomach.

“Organisms affected by plastic can die from various types of poisoning, but more commonly they die from suffocation due to larger plastics, or they die from malnutrition,” explained Munroe and classmates Michael Galpin and Zane Henderson in their project description.

Teachers Alissa Mather (Socials) and Amber-Skye Brammal (English) are the geniuses behind the project and developed the idea of combining the two classes and incorporating art as a powerful medium to showcase student learning and understanding. Mather said that through the Artist in the Classroom grant awarded by ArtStarts in Schools that school teacher-library Tami Jerome helped them apply for, they were able to secure Aylward to work with students.

Working with the class for two hours a day for a little over two weeks,  Aylward guided the students in developing their research project from the written form into a visual story.

“We were asking our kids to take risks with this, but we also took a big risk,” explained Mather. “It was a tight timeline, so we knew we were putting a lot of pressure on the students in terms of having limited time to research and time to produce their artwork.”

Brammal explained that English and Socials are not experienced in isolation, particularly in the classes’ units of study on truth and reconciliation, prejudice and intolerance, homelessness and poverty, as well as the environment. Poetry and storytelling are expressions of this learning and a way in which students can make a statement on these issues.

Student Caleigh Prowse said the learning outcomes of the inquiry-based project appealed to the way she prefers to demonstrate her knowledge.

“The [project] made us try harder and really focus. It brought the creative out in me,” said Prowse. “To me, it’s not a competition showing our learning in our own ideas and in our own words.”

Aylward was moved deeply by the work of the students, commenting that many caught on to a project idea quickly while others struggled but all the while they collaborated through their journey.

“I’m so proud of these kids,” said Aylward. “I thought about it for years as a professional artist how to do this as my own work of art to put in a gallery as a statement for all the issues in Canada and for about 10 years I have been listing things I can include for each panel.”

Aylward’s vision came to fruition February 1st when asked by the organizing committee for the World Community Film Festival to display the art installation at the Sid Williams Theatre for two days where the student’s insightful work could be viewed by hundreds more. And Aylward witnessed his masterpiece concept, a decade in the making take on a life form of its own.

The installation now resides temporarily at the Comox Valley Schools’ Board Office where it will remain on display for a few more weeks for district staff, students and general public to come take a peak. The School Board office is located at 607 Cumberland Rd. Courtenay. Viewers are encouraged to call ahead to make sure the room is not being occupied during their planned visit.