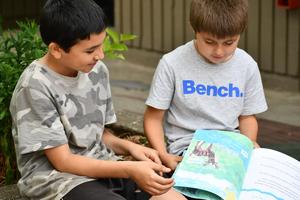 Indigenous students from Puntledge Park Elementary have transformed the First Nation’s words of a recently commissioned song for Comox Valley Schools into a colourful picture book. A song that celebrates the Kwakʼwala culture, and speaks of the unique landscape of mountains, ocean, and rivers of our region can now be enjoyed in a children's book of beautiful illustrations.

Comox Valley, B.C. – One man’s legacy and one Indigenous language will forever be preserved in a beautifully crafted children’s picture book.

Nineteen young Indigenous students from Puntledge Park Elementary have transformed the First Nation’s words of a song written and gifted to Comox Valley Schools into a colourful picture book.

On Friday 14 June, the children unveiled their creation during a special ceremony held in the school courtyard to an audience of school trustees, parents, staff, and fellow classmates.

The book, titled Little Giwas, is part of a learning journey for Colleen Devlin, Indigenous Education kindergarten/grade 1 teacher, who recently began to learn Kwakʼwala, a dialect spoken among 250 Indigenous people approximately of the Pacific Northwest Coast. The impetus to Devlin’s studies was the United Nations Declaration made in January that 2019 be the Year of Indigenous Languages.

The song is called A̱m’lala sa Ḵ̓umux̱se, meaning Play Song of the K’omoux (Comox), written by William Wasden Jr., a First Nations singer/songwriter and artist. The song celebrates the Kwakʼwala culture and speaks of the unique landscape of mountains, ocean, rivers, as well as the natural wildlife that inhabit the Comox Valley.

“The importance of any acts of reconciliation and reclaiming a First Nations culture is to teach and focus on its language. Kwak’wala is one of a number of founding languages in this area,” explained Devlin, who is of Cree-Metis heritage.  “If we are to teach students about respecting the land, its animals and the people we need to learn a bit about the language.  The song just resonated with me and I thought a picture book would help young students around the district care more deeply about the song if it were linked to our local region.”

The picture book holds another Valley meaning. It was dedicated in memory to Micah John Messent, a former Puntledge student who perished aboard an Ethiopian flight in March at the age of 23. Messent, a Metis native, was a strong advocate for the natural beauty of the Comox Valley where he was raised. He was pursuing a future in environmental stewardship when he was invited to attend UN Assembly of the Environment in Nairobi.

The book unveiling ceremony commenced with a singing of A̱m’lala sa Ḵ̓umux̱se by David Dawson, an Elder-in-Residence and a First Nations native and song keeper. The young students performed a native dance called Little Bear, followed by story time that allowed the young artists to showcase their creation to family and friends.

This is the second in a trilogy of books for Devlin. The first, Little U’ligan was created last year by grade 5 students and is the story of a young wolf. Devlin already has the third book under development to accompany a sensory path that is nearing completion in the school’s courtyard.