Community Connections Through Art is the Focus for Highland's Recent Project 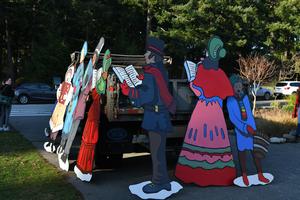 The return of the Village People atop Comox Hill will be warmly welcomed by a community of traditionalists who wondered where had those carolers gone.
Thanks to the creative art students at Highalnd Secondary, the Victorian-style characters will be back on display this holiday season.

It started with a question. What happened to the characters that stood atop Comox Hill for years and years to mark the festive season?

Whether we consciously thought about it or concluded is was just time for change, the Town of Comox suddenly, one year and without warning, stopped displaying its ensemble of carolling Victorian-style characters.

It was a mystery that intrigued Highland Secondary’s art teacher. So much so, she began to probe. Being involved in the lives of several students for many years, Charlotte Hood-Tanner has come to know her community well. When it comes to pursuing a project, a little nudge is enough to get the ball rolling.

That is how the return of the Town of Comox Village People came to be. About one year ago in Winter 2018, Hood-Tanner appraoched a Highland parent and her friend who happens to be employed with the Town of Comox Public Works Department about the mysterious disappearance of the carolers, only to learn that years of standing erect in the winter weather had taken its toll.

It was a good enough explanation to spark an idea. Highland soon took the proposal to the Grade 9 and 10 art students to get involved in a make-over and bring these beloved characters back.

A collaborative endeavour began. In the spring this year, Town of Comox staff took on the job of creating new cut-out designs, which were replicated exactly as the previous characters and supplied the school with the paint. The rest was up to the students. With a little creativity and a deep appreciation for inclusiveness, the new characters came to life and represent the diversity of society today.

Students wanted to keep the characters to their original Victorian theme rather than create something new.

“We just tried to create a more contemporary vibe but keeping the theme Victoria because we didn’t want to change the tradition,” explained Hood-Tanner.

Kieran McCluskey, Highland art student, explained that the idea of making the characters inclusive came from an idea shared between his fellow art students and their teacher.

“The art class students tend to be the best at being inclusive with everything,” shared McCluskey. “Overall, the experience was really good. I was optimistic about the project all along and it turned out way better than I ever thought it would.”

Hood-Tanner encourages her students to be creative with their own personal art but to develop a sense of community.

“It’s about creating things but also being able to share them with the community,” added Hood-Tanner. “We have a great school and a really great community, so it just made sense to put those two things together.”

On Thursday, November 21, nine freshly painted, refurbished characters were unveiled by the student artists on the school grounds.

The unveiling at Highland was later posted on the District Facebook page and Instagram feed that afternoon creating a wave of encouraging sentiment in response. Heart and happy face emojis with comments including “They are back!” ensued. Surprisingly, or not, this community loves its holiday traditions. Why wouldn’t we want them back!

The characters will be unveiled at the Town of Comox season kick-off  November 29th.