Blog
You are here: Home1 / Blog2 / News3 / Reward for information about vandalism in SD 71 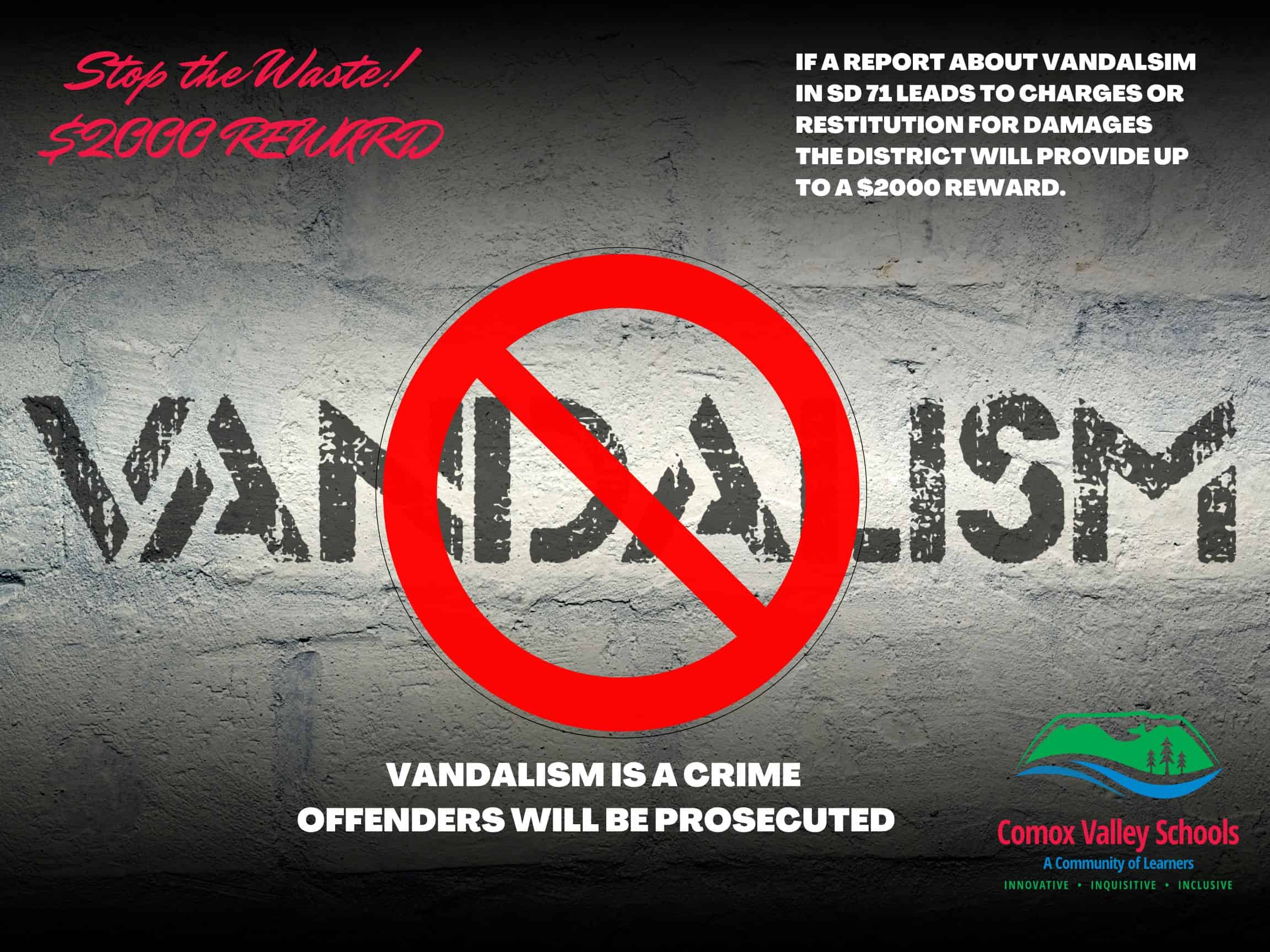 Comox Valley Schools is offering a reward of $2000 for information regarding multiple incidents of vandalism at schools so far this school year. If a report leads to charges or restitution for damages, the district will provide up to a $2000 reward.

In mid-October, there were multiple break-ins at Ecole Puntledge Park Elementary that resulted in nine broken windows and other serious damage that required immediate repair by staff. It’s estimated that the damage will exceed thousands of dollars. Ecole Puntledge has recently been the subject of several other serious acts of vandalism, as well as attempted arson and theft.

There have been many other recent acts of vandalism at Comox Valley Schools:
• Cumberland Community School had several windows broken and racist graffiti has been removed multiple times.
• Courtenay Elementary School has been repeatedly targeted by vandals, theft and loitering related damage.
• The former Comox Elementary site has experienced several break-ins and graffiti related damage.
• Highland Secondary School is subject to frequent graffiti and broken windows.
• Lake Trail Community School is regularly vandalized with graffiti.

Comox Valley Schools is working closely with the RCMP to identify those who are responsible for these acts and others at our school properties. The district has some surveillance and digital evidence that is being analyzed and handed over to the police.

“It’s sad that people think our schools are places that warrant destruction and defacing,” said Comox Valley Schools superintendent Tom Demeo. “The last few years have seen a spike in vandalism in the Comox Valley and this is costing us a significant amount of our funding that should be spent elsewhere.”

Last school year, SD 71 spent in excess of $30,000 on vandalism and loitering related costs. That amount is about 50 per cent higher than two years ago and three times more than three years ago.

So far this year, the district has spent over $20,000 on vandalism and loitering related costs and it’s early in the school year. This is money that should be used to support students.
The district is hoping that anyone with information about vandalism at school property will call 250-334-5500 or the RCMP and make and a report.